The Importance of Local Economic Leadership

I attended an event a few weeks ago in Manchester hosted by the Council and the OECD LEED programme on the importance of local economic leadership in promoting sustainable inclusive growth. This was the LEEDs annual meeting and also highlighted a recent publication looking into such matters. I feel that the publication is worthy of sharing and discussion widely as it succinctly emphasises the importance of such leadership in the modern world. 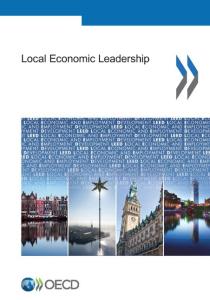 The publication called Local Economic Leadership focuses largely on four city case studies of Amsterdam, Hamburg, Manchester and Stockholm – but draws from wider experience and research into other cities in recent years. Now let me say there is a danger with such research, which had the full cooperation and partnership of the cities involved, that it becomes a confirmatory and celebratory report, in effect a marketing document for the cities involved. This report whilst focussing on the positive in each city steers a fine line and avoids falling into that trap by highlighting the potential failures of local leadership and the dangers of falling into vanity project and white elephants. However a few examples might have helped to cement its independence as even the best lead cities make mistakes. Another failing as well is it talks about evidence lead leadership but fails to provide much evidence of the impact of such leadership.  That said it is a really interesting piece of commentary on local economic leadership and well worth time setting aside to digest it.

The report looks into why local economic leadership is important and how it can add value. In summary it notes this can include how

It states that ‘Exceptional leadership skills are required amongst local government leaders and their partners if economic development is to succeed‘ and recognises that there are various potential common elements that underpin successful local economic development
leadership.

It recognises that leadership nowadays is facing a number of complex external challenges. For the mature EU cities which are the focus of this piece these include

The report also recognises the difficulties of leadership currently. They identify common themes such as

So what have I learned from these four cities. What is there for Birmingham and other cities.  Well much of it confirmed my belief in what modern leadership should entail which I will come onto in a minute. I knew much of the Manchester story and it is to be applauded.The stress on long term partnership working with neighbouring authorities is something we need to commit to. The proposed West Midlands Combined Authority is not just about getting a quick win from George Osborne but requires long term trust and strategy building for it to be effective.

It would be good to learn more about how Hamburg have increased their numbers of HE students and their employment rate – through actions on their education and inclusion agendas. This might be transferable to Birmingham given our lower than expected take up of HE courses and given our troublingly low employment rate.

It was interesting to hear about how Stockholm invested significantly in developing an Innovation Strategy for the Stockholm Business Region. Lets hope that the new West Midlands Combined Authority places as much emphasis on innovation as has Stockholm.

It was interesting to read more about the role of the Amsterdam Economic Board – a private sector led board that has taken leadership of key elements. Perhaps there is a lesson here for how the three LEPs in the West Midlands Combined Authority area might take forward there work – jointly.

Of course there is much more to learn than these brief snippets from the report and whilst earlier on in this post I almost questioned the rationale of the Cities in participating in this piece of research what must be commended is that they are open and outward looking and seeking views from elsewhere.on their leadership. Birmingham and the rest of the combined authority area would benefit from such an outside view.

What are the key overall lessons for cities generally. Looking to the future a few key areas are identified.

Innovation has become a key aspect of local economic leadership. – cities will continue to be faced by challenges which cannot be met using their formal and official powers alone. Leaders will therefore need to continue to innovate in future in order to ‘fill the gaps’ – but they will not be able to do this alone.

This means that future local economic leaders will need to be adept at influencing and
persuading other stakeholders, in order to make space for their innovations. They will need to
become expert in sharing, listening and networking, in order to learn about and adopt
successful tools and platforms developed in other places.

Leaders will certainly need to be skilled in planning for the future so that they can anticipate challenges, and develop the necessary tools and innovations in advance wherever possible.

It is already clear that local economic leadership is no longer the concern of
elected local government alone. The last decade has already seen new groups such as
networks, business leadership groups and authorities from wider economic areas drawn into
the sphere of leadership.  In the future even more actors will be concerned with their
leadership.

A key task for future leaders will be making the distributed system of leadership more coherent. This can be done through a combination of:

As you may have guessed large parts of this post have been lifted verbatim from the report (for those in HE – this would fail a ‘turnitin’ evaluation), because it puts the arguments very cogently. This is an important report for all cities and city regions that are starting to reflect on how they proceed in this new ‘combined authority’ world. Important as well for all leaders – who think they have power – which they do – but not in the old sense. A must read!