Is the Greater Birmingham and Solihull LEP a Cohesive Partnership?

I had the pleasure of attending the AGM of the Greater Birmingham and  Solihull LEP this week at the Villa ground. Despite the poor news unleashed by the Chancellor concerning the relative small size of the Local Growth budget it was generally an upbeat event with a lot of positivity and good news about the progress of the LEP. FDI is up, numerous projects are being funded and if attendance was anything to go by interest in the LEP is at a high point.However despite the positive news I think the LEP still has a long way to go to mature into a cohesive unit. This I think is evidenced by the presentation given by Cllr Meeson from Solihull Council on the UK Central proposal. Now in a joined up LEP such an initiative would probably be cross boundary given its proximity to Birmingham. Not a bit of it; the maps in the prospectus clearly show all activity in Solihull and Birmingham is but a small neighbour. Cllr Meeson in his speech found it hard even to mention Birmingham.  So obviously it is still early days for joint working.

The problem is we are at risk of making mistakes. The UKCentral proposal has been criticised in the press for old style development. 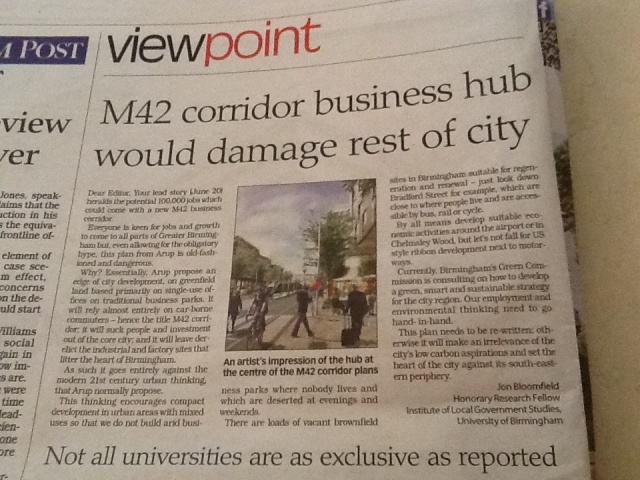 Whilst parts of it are sensible building on current public transport nodes; other parts of it seem clearly reliant on car based transport. The 200 page document provides no analysis of its carbon footprint which for such a massive development is a major flaw. This sort of development should be fully evaluated for its  carbon impact and perhaps the forthcoming Draft Spatial Planning Strategy will have something to say on this this; but don’t hold your breath.

But  you might say we need jobs and you would be right, so to continue the argument we have to relax our approach to climate targets but I would say this is not just an environmental issue but also an economic issue. The future is undoubtedly one where energy costs will be higher. Already large superstores are back tracking on big out of town developments. As energy gets more expensive the competitive locations will be those served by high volume public transport. Some of the developments proposed in UKCentral are far from satisfying that requirement. So this points to an environmental and economic short sightedness that could cost the LEP in times to come.

The blindness of the LEP in this respect was laid clear when a question from a representative from the energy company EON in the audience asked whether the LEP should introduce a carbon target. Julia King Vice Chancellor of Aston University;  new to the LEP board, sidestepped the question in a politic manner. She well knows the importance of the agenda given her seminal work on the future of transport in a low carbon era  but probably felt this was not a discussion for an open forum. She undoubtedly will be pressing for a greater ‘carbon awareness’  to the LEPs actions.

This is not necessarily a negative post; it is reflecting that partnerships take time to build and GBSLEP is still young. It took Greater Manchester many years to bed down joint working but I would say given the imperative of the economic situation and the growing environmental and economic cost of avoiding the carbon question that the partnership learns quickly  to work jointly across boundaries in a more than superficial way  if it is to deliver all we need.

← A435 Corridor: Connected Communities of Maypole, Kings Heath, Moseley, Balsall Heath and Digbeth #Birmingham
Don’t you just miss a space for rational policy debate in and about Birmingham →